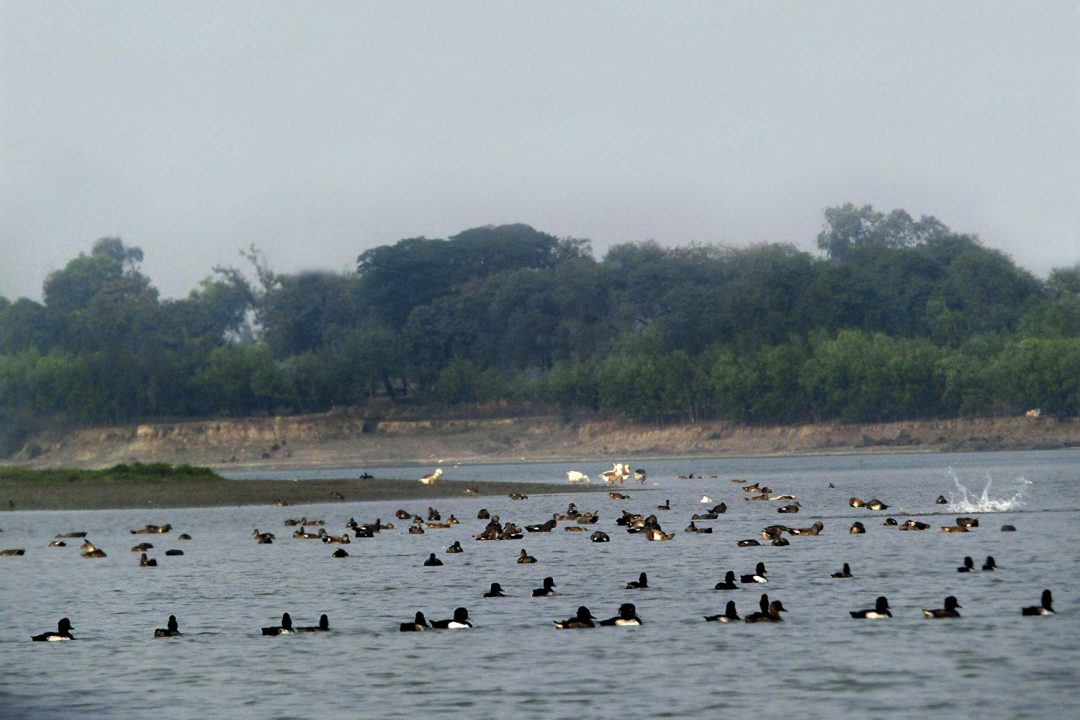 Excitement-level went high … I approached much closer to the object to focus perfectly … and clicked continuously at the moment longed for. With a great expectation I glanced through the display screen. All the shots were full of droplets from water-body, but the target was found nowhere in series of the frames. In fact, I was eager to capture aquatic activities of a feathered guest named ‘Greater Scaup’, who had paid his winter visit to this location for the first time. Accompanied by previous acquaintance Alam, a young local and committed bird-enthusiast assured not to be worried about fulfillment of my desire.

In a bright charming winter morning, we set out boat journey towards upstream on the Piyali river flowing alongside of Kella village. The place is rather well known to outing-seekers as Piyali Island, located near Dakshin Barasat in 24 pgs(south).

Within a short span after starting, a large group of Tufted Ducks in distance came into sight at first. Alam spotted the specific one from the assemblage by naked eyes, but I couldn’t mark that through binocular. The boat proceeded slowly on the point of water birds and I could easily distinguish the Greater Scaup from Tufted Ducks. The male Greater Scaup looked without tuft, slightly larger and stockier than Tufted Duck, with upperparts covered by prominent patch mixed of white and grey extended to rear. The single fresher guest seemed comfortable enough with the gregarious Tufted Ducks. Interestingly majority of them were sociable enough to allow us to watch and capture their activities from a nearer distance. I witnessed their movement, interaction, feeding habit for a sufficient time and finally was enchanted by amazing taking off from water. Probably, plenty of aquatic plants and algae in shallow water are the key factors to become a beloved wintering location for the migratory ducks.

It was already midday, when Alam parked the boat at shadowy bank to have some snacks and tidbits. After a period of time, the boating resumed to direction of the opposite bank. The distant visual of numerous diving ducks strewn over placid Piyali river was really striking. The mixed flock was a comprisal of Lesser Whistling-duck, Gadwall, Tufted Duck and Northern Shoveler. Surprisingly, Eurasian Wigeon which I chanced on last year also, was absent there ! Alam earnestly tried to place the boat closer to the flock for better sighting. A solo Striated Heron was seen as perched still on a log, had certainly an intentional wait for prey. Little Ringed Plover, Common Sandpiper, Black-headed Ibis, Common Redshank – all were mostly in busy mode of hunting and feeding.

The daylight just had to turn to fade when my pleasure-trip concluded. I strolled for a while at riverside and that of Dongajora village to have a sense of rural life. Then, we rushed to explore the vast, enclosed land of sylvan beauty. Variety of loacal birds could be seen all around the area, owned by private authority. Facing to the south end, Piyali river flows to meet Matla river nearby Kultali block.

I left the effort of capturing a couple of restless Purple-rumped Sunbirds, when Alam forced me to pay attention to a Black-capped Kingfisher seated motionless on a branch inclined to water-level. In the late   afternoon, the loud hooting was heard as a few Spotted Owlets were found highly active above the tall trees. Their high-pitched voice was supposed as a reminder to me that I had to return to urban bustle. The flying flocks of birds silhouetted against twilight sky were noticed on the way back to their haven.